WELA Fights Against Unconstitutional Use of WLAD Religious Exemption 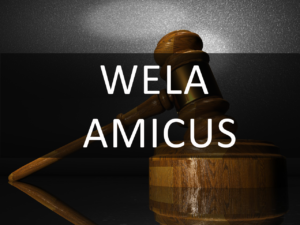 WELA filed an Amicus Brief in Matthew S. Woods v. Seattle’s Union Gospel Mission on behalf of the plaintiff, an attorney whose application to work at the Seattle Union Gospel Mission was rejected because he is bisexual. The Gospel Mission claimed that they could reject applicants due to their sexuality under a religious exemption within the Washington Law Against Discrimination (WLAD). WELA’s brief was written by Mr. Jesse Wing and Mr. Jeffrey L. Needle.

The Washington Law Against Discrimination prohibits discrimination of anyone based on any feature or characteristic. It does, however, contain an exception for “religious or sectarian organizations not organized for private profit” RCW 49.60.040(11).

Under this exemption, if an employee is considered a minister, then they can be included under the exception. A religious organization cannot discriminate against non-ministerial employees.

In this case, the Seattle Union Gospel Mission claims that all of its employees are ministers, and therefore all employees are exempt from the WLAD. However, similar federal cases have established a set of four considerations, referred to as the “totality of circumstances” in order to determine if an employee can be considered a minister. These include:

Additionally, courts often consider the nature of the religious functions and employee may have performed, and the amount of time an employee spent on particular activities.

“Totality of Circumstances” at Work

These four circumstances have been utilized in two notable federal cases.

In Hosanna-Tabor v. EEOC (2012), a teacher at a Lutheran school was fired after developing narcolepsy. The teacher sued the school under the ADA and the school responded that they were exempt under the First Amendment’s Free Exercise Clause, which protects religious organizations from government interference with its employees if they are considered “ministers.”

The court concluded that the teacher in this case was in fact a minister because she had extensive religious training–including college-level classes in ministry–claimed the ministry exemption on her tax returns, had formal religious teaching responsibilities at the school, and would occasionally lead services at school.

In Biel v. St. James School, a teacher was fired after she developed breast cancer. She sued under the ADA, and the school claimed the ministerial exemption. Although her initial claim was dismissed, the Ninth Circuit revered the decision.

This decision was again based on this teacher’s “totality of circumstances.” The teacher was Catholic, and held a degree in liberal arts, as well as teaching credentials, from a state school. Her education did not include extensive religious training. Although this teacher taught a required religion curriculum, it was from a workbook provided by the school. Additionally, this teacher did join her students in prayer, but allowed students to lead them. Following these circumstances, the court found that this teacher was not a minister.

Although the court was fractured, it ultimately determined that although the hospital had a religious background, Mr. Ockletree was performing a secular job and the WLAD religious exemption was unconstitutionally used against him. This decision affirmed WLAD’s protection for thousands of employees working at religious organizations but carrying out secular jobs.

Unfortunately, Ockletree does apply neatly to Mr. Woods because  the employer in this situation  claims that all employees were considered “ministers.”

The Seattle Union Gospel Mission claims that all employees have religious elements to their jobs, including the attorney position as a staff attorney to which  Mr. Woods applied. Because Ockletree does not set a state precedent for this, the court should refer to the federal concept of “totality of circumstances” established in Hosanna-Tabor. When examining these considerations it can be determined that:

Following the totality of circumstances, it is clear that Mr. Woods cannot be considered a minster. This indicates that the Seattle Union Gospel Mission discriminated against Mr. Woods’ application due to his sexuality, violating the WLAD.

WELA urged the court to hold that the WLAD’s religious exemption is unconstitutional when applied to employees who do not qualify as a “minister” or the functional equivalent of one. If the court rules that Mr. Woods can be considered a minister in this case simply because the Mission claims all of its employees are, could then be applied to the tens of thousands of employees working for religious organizations but performing secular jobs. This would remove the WLAD protections from workers at hospitals, universities, primary and secondary schools, community service organizations, and even the YMCA, and it would allow their employers to discriminate against them at will under the protection of the religious exemption.

While the court did follow much of the reasoning present in WELA’s Amicus Brief, the case was decided after the U.S. Supreme Court decided Our Lady of Guadulupe School v. Morrissey and overruled the Ninth Circuit in Biel v. St. James School. Because of this, the Washington Supreme Court has remanded the case in order to decide if Mr. Woods was a “minister” consistent with its opinion.