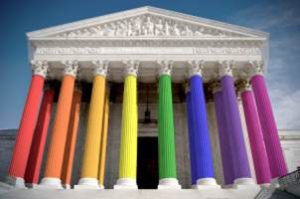 The Equal Employment Opportunity Commission is arguing that the Civil Rights Act covers workers’ sexual orientation. ?The federal agency that enforces civil rights in the workplace is pursuing its first lawsuits ever based upon a worker’s sexual orientation.

The Equal Employment Opportunity Commission announced Tuesday that it has filed two cases it described as “groundbreaking” — one on behalf of a gay male employee of a Pennsylvania medical center, another on behalf of a lesbian employee of a Maryland pallet manufacturer.

A supervisor at Scott Medical Health Center, in Pittsburgh, subjected the worker to “various anti-gay epithets” and “highly offensive comments about his sexuality and sex life,” leading him to eventually quit his job, according to the EEOC. A supervisor at IFCO Systems, the Maryland employer, taunted the employee there over her sexual orientation and fired her after she complained about the harassment to management, the agency said.

The EEOC is responsible for protecting workers’ rights under the Civil Rights Act, which bars employers from discriminating based upon race, religion, sex or national origin. The cases announced Tuesday are notable because a worker’s sexual orientation is not explicitly protected under that landmark law, and the EEOC has never before filed such a suit on behalf of a gay worker (though it has on behalf of transgender workers).

“With the filing of these two suits, EEOC is continuing to solidify its commitment to ensuring that individuals are not discriminated against in workplaces because of their sexual orientation,” David Lopez, the commission’s general counsel, said in a statement. “While some federal courts have begun to recognize this right under Title VII, it is critical that all courts do so.”

The EEOC has been inviting workers to submit charges claiming discrimination over sexual orientation since 2013, as Bloomberg BNA explained. No federal appeals court has ruled yet that the Civil Rights Act covers a worker’s sexual orientation, making it likely any ruling in favor of the EEOC would be challenged.

The EEOC said Tuesday that it tried to settle both cases before filing lawsuits against the two employers.